BeebEm and Marathon in RetroPie

I’ve been setting up an SD card for my Raspberry Pi 2 with the latest stable version of RetroPie. RetroPie is a collection of emulators presented from a single interface that can be navigated easily with a controller. BeebEm is a BBC Micro emulator, and is not included as standard in RetroPie.

As I, and several of my friends grew up with BBCs, I decided that this needed sorting and so following these instructions, I was up and running in no time. I also added Marathon 2 and Marathon Infinity into the “Ports” section, using the method shown here. This second method is a lot simpler, but is only really suited to single games, rather than whole platforms with multiple games. For some reason, the original Marathon game did not work properly (loaded, but would not enter a game). I will return to look at it another time.

For those who do not know, the Marathon games were a series of games produced by Bungie in the 1990s (after Pathways into Darkness and Gnop, before Oni and Halo, at a similar time to the Myth series!). The games were fun to play, good to look at and had well written story lines. A rare thing at the time. Just before Microsoft bought Bungie, they kindly released the source to the Marathon engine and so a community project (called Aleph One)was born to update it and port it to new platforms. This is how, years down the line, I am able to play the games on a computer the size of a pack of cards, running on a processor derived from the follow on of the BBC Micro, using an operating system that it was never released for. 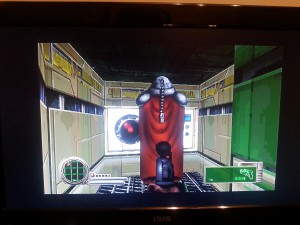