Updating to 17.10 appears to have cleared the error, although it was a 1.3GB download and changed a huge amount of stuff. Hopefully it hasn’t broken compatibility with anything I use.

The error described within this post has now returned to all of the devices I have Ubuntu Gnome installed on following some updates I ran. Sadly, this fix doesn’t seem to work any more. I’ll update this post if I spot another way of fixing it. Searches are made more difficult by the fact that this error seems to have a long history and comes and goes with time right back into the distant past. Original post follows, as it still might be useful to some people and doesn’t do any harm.

A few months back I got a new desktop computer. As it was based around a Ryzen chip, I needed to use a bleeding edge Kernel to take full advantage of some CPU features. While these days I usually default to using Linux Mint, there was not a version which used the required Kernel 4.10 minimum. 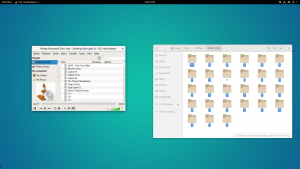 I resigned myself to switching to a more conventional Ubuntu install, but decided to do some reading first. At about the same time, announcements were made by Canonical that they would be moving away from Unity in the future – this suits me just fine, as I have to admit that I’m not a fan of Unity (probably mainly prejudice resulting from issues I experienced on barely supported hardware the first time I tried it). My reading informed me that 17.04 would be the last version of Ubuntu to use Unity and that moving forward Ubuntu would most likely move to Gnome.

I decided to try Ubuntu Gnome 17.04 as it would be the way things were going anyway.

Installation was simple enough, I ended up following some instructions to update the kernel slightly for which unfortunately I didn’t make a note of the source.

One issue I’ve noted with this install is that with fresh installs I get an error every time I boot, along the lines of “system program problem detected”. I’ve noted using :

… that the error seems to be referred to as “_sbin_plymouth.0.crash”

Over time this issue went away – I think I’ve installed or updated something along the way that has fixed the issue, or it has just stopped telling me for some reason. It hasn’t caused any issues anyhow. Several months on, I have re-used the same installer image and have had the same issues, this time on an UDOO x86 SBC.

Poking around the internet offered a few solutions, the one I have used and appears to have work is to install plymouth-x11. The following command was used to do so :

This seems to have solved the problem – hopefully it will do so for anyone else with the same issue. While it doesn’t seem to be a show stopper, it is nice not to start every login with an error telling you something has crashed! I would include a screenshot or detailed contents of the error… but I forgot to do so before I fixed it!