Lots of of things arrived from China this week, most interesting thing is a number of lithium polymer battery charger boards from here… 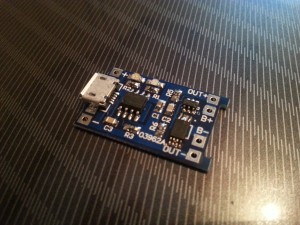 I’m planning to use this as part of the power supply for arduino projects. This provides the ability to re-charge a 3.7v lithium ion battery of the type used in my quadcopters. I’ll then run the output terminals into a DC-DC converter, when they arrive, to get a steady 5v. The inspiration for this is in part from this interesting article, although I had ordered the chargers before I spotted it.

Lithium ion batteries do not like staying empty so it is probably sensible to stick a potential divider and monitor the battery voltage. When The voltage gets too low, it should be possible to shut down the circuit. For now, I’ve wired in a JSP connector (correct me if it isn’t, I find it difficult to find out exactly what connectors are called). While charging, a bright red LED is lit, once the device finishes charging, the red LED is extinguished and a blue one lights instead. I’ve checked the voltages on the batteries after charging, but haven’t done any substantial testing yet. 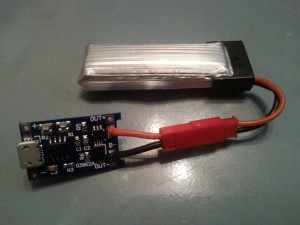 I also got a number of other things at the same time – I got some more breadboard, because you can never have enough, a Raspberry Pi breadboard breakout, because I gave one of mine away the other week, some new little breadboard power supplies, because they looked like a better design than my existing ones, some SNES style USB controllers and some battery boxes.

My existing breadboard power supplies cover quite a few rows of contacts. They also do not appear to supply enough current for my Z80 computer project, but as these new ones use the same regulator (AMS1117), I’m unlikely to have the same issues. It might have been something I was doing – I’ll investigate again at some point in the future.

These Raspberry Pi breadboard breakouts are great for working with the GPIO on the Raspberry Pi without too much faff. I have used them for projects where I have no intention of making any custom boards – I do have the stuff to make up my own ribbon cables and have IDC board connectors, so this is always an option if I want to make something smaller. 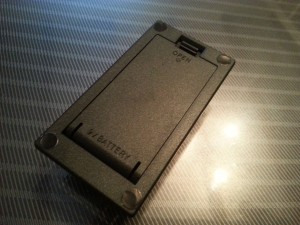 Putting batteries into project boxes in a way that an end user will be able to change them without too much fuss has always been an issue for me. I really don’t like how project boxes cost as much as all the electronics held within, nor do I like that the ones with battery compartments cost three times as much. This is my attempt at finding a solution. Sadly, I’m trying to move away from 9v batteries, because they’re not really the best solution. 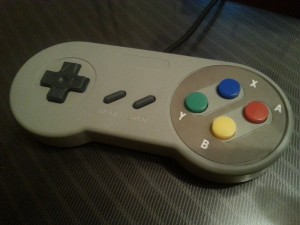 Hours of fun – I have now bought eight of these in total. Four to give away to colleagues at work who have recently obtained Raspberry Pis, and four of my own. These work straight out of the box with the Retro Pie image. Retro Pie boots straight into Emulation Station, with the bulk of the setup done for you. Unfortunately, it still takes a while to get ROMs sorted etc. but there isn’t really anything they can do about that without breaking the law! The Raspberry Pie 2 is able to run emulators up to and including the N64 and original PS, although I find it is really best at the SNES and various Nintendo handhelds.