A few years ago I bought myself a ReadyNAS Duo. I really like the thing – it has a steel case, rubber feet, three USB ports for external hard drives and printers and a gigabit ethernet port. I liked it so much I also bought my father one. Early on, I modified mine to allow root SSH access and it was actually the machine I learnt a lot of my Linux skills on. SSH can be enabled using the add-on listed here on the official Netgear site.

A few years later, I spotted an article on the internet which discussed upgrading the RAM in a ReadyNAS Duo, as the machine has a laptop style SODIMM slot. As the RAM was now effectively “old”, second hand prices on eBay were extremely tempting, and so I decided to upgrade the original 256MB of RAM. Given that there were hardly any price differences between 512MB and 1024MB, I decided to go for the full Gigabyte of RAM. The part arrived and I installed it, it was recognised and everything was good. Interestingly, a while later I read more and discovered that lots of people have trouble performing this upgrade and many products with the correctly specification simply do not work or are unreliable. Seems I was lucky.

Fast forward further few years and I mentioned the RAM upgrade to my dad and we agreed that it would be interesting to upgrade his as well. I did some digging and re-discovered the issues people had. I decided to give it another go and ordered a couple of SIMMs from Hong Kong, where the second prices were lower for two than they were for one in the UK. The parts actually arrived in 7 days, which was better than I was expecting. Before giving a SIMM to my dad, I’ve decided to test it in my own ReadyNAS. Should you want to do something similar, the following should help.

There isn’t a huge benefit to upgrading the RAM in your ReadyNAS Duo. There may be small speed increases, but the main reasons I’ve done so are :

For the upgrade, you will need the following RAM: 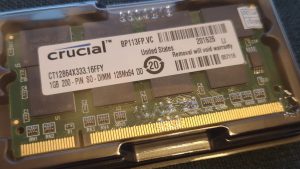 I seem to have had luck with an unidentified 1GB SIMM using Infineon chips, and a 1GB Crucial (probably) SIMM using Micron chips. The RAM I’m testing today was purchased from the eBay seller galaxyshoppingcn in Hong Kong. The listing is currently still available here, but obviously this wont last forever. Current price is £6.66 for a pair of SIMMs. 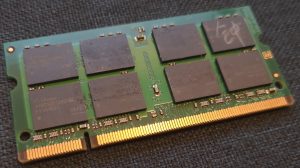 To access the RAM slot on the ReadyNAS Duo, it is necessary to remove the two right hand screws highlighted in red in the following picture (borrowed from the manual). 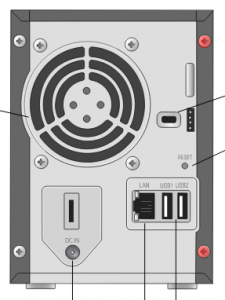 Once these have been removed and stored safely, carefully place the ReadyNAS on its side on a soft surface with the long side face closest to the two screws facing upward. Place one hand flat on the long side face and hold the rest of the unit with the other. Push backwards (towards where the screws were removed from) on the long face and it should clunk backwards about 10mm or so with intermediate force. This side panel is very similar to traditional PC case side panels and so you should now be able to lift it off, exposing a single, occupied SODIMM RAM slot. 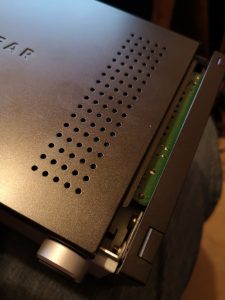 At the two ends of the RAM slot are silver coloured retention leavers. At the same time, push the end of the silver leavers away from the RAM SIMM until it releases and stands up further from the socket. 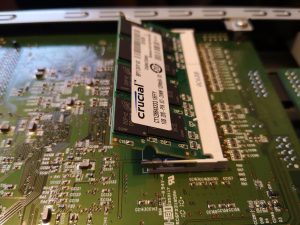 Take particular note of how the RAM sits in the socket at this point – the angle, and how much of the root of the RAM is within the socket. Note that the contacts on the edge of the RAM are almost hidden.

It should now be possible to withdraw the RAM SIMM. Avoid touching anything other than the edges of the (usually) green PCB and look after the SIMM as it is the only one you have which is guaranteed working!

Take your new, higher capacity RAM SIMM and place it in the socket in the ReadyNAS. Place it at the same angle as the previous SIMM was after you released it, taking notice of the alignment notch about one fifth of the way along the SIMM. Ensure that it is fully seated in the slot – this may require some pressure – the gold contacts are usually almost invisible when it is properly seated. Also see the “Released RAM” image above.

Once you are satisfied, push the highest edge of the RAM down so that it becomes parallel with the socket. It should click slightly at both ends as the latches slot home. If it presents any significant resistance, ensure that it was seated properly and try again. Consider fully removing and re-seating.

RAM in the Slot

Place the removed side panel back in the location from where it was lifted off – approximately 10mm from the closed position. For reference, see the photo above titled “Mind the Gap”. Once it is sat flush, firmly close it back to its home position.

Depending on how confident you are of success, you could either re-install the screws now (taking care not to cross-thread them), or wait until testing is finished.

Checking that it is recognised

Connect an ethernet cable to your ReadyNAS, connect power and turn on the device as usual. Wait until all lights have stopped flashing and log into the device admin page as you usually do (for example http://192.168.1.2/admin if that is your ReadyNAS network address). If the ReadyNAS does not successfully boot, firstly ensure that the new RAM SIMM is correctly installed and try again, and then give up, re-install the original RAM (ensure /that/ still works) and go back to eBay to find another SIMM. 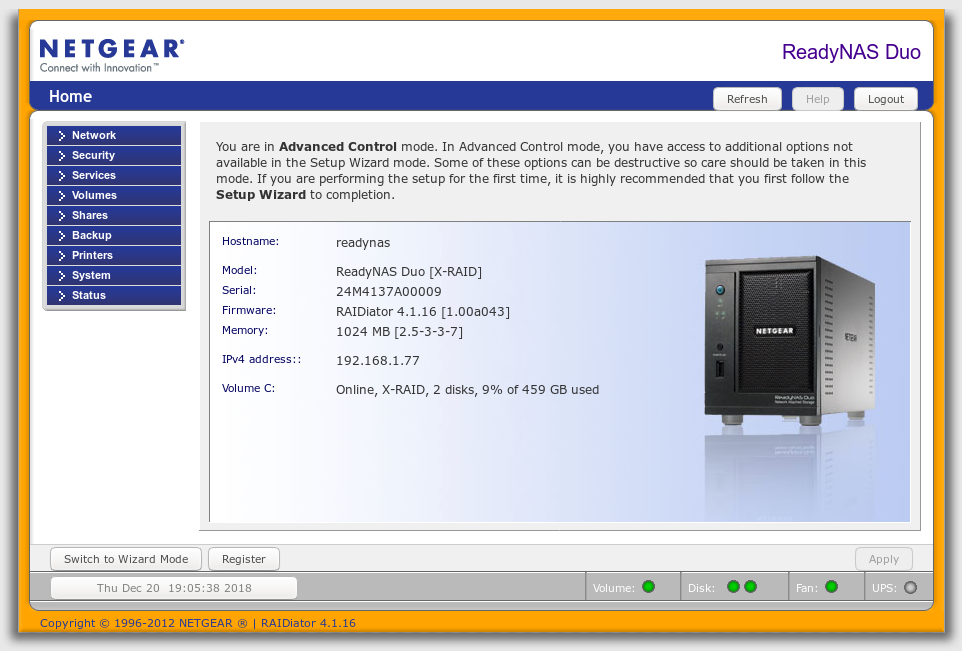 If everything is looking good at this stage, on the admin home screen, you should see reference to 1024MB of RAM and the string of numbers “2.5-3-3-7”. This means that the RAM is fully recognised and that it is running at the correct speeds.

Between this, and this websites, I put together how to undertake a full memory test and what to expect to see.

Note that the memory test will take a substantial amount of time, during which the fan will run at full speed. Only run the test if you have the time to leave it. For me, the test took approximately an hour and a half.

During the test, the power button will blink for the entire period. As the memory test goes through each of eight steps, the two activity lights will progress through the following pattern :

The ReadyNas Duo will remain in this state indefinitely (useful if you run the test unattended). Poking the power button restarts the ReadyNAS.

If you have not already done so, re-install the case screws.